There is a protective membrane aligning the body’s internal organs, and it is called mesothelium. Mesothelioma is the cancer that affects this membrane. Majority of the cases of this disease start in the pleural mesothelium of the chest cavity but can start in the heart or abdominal cavity. 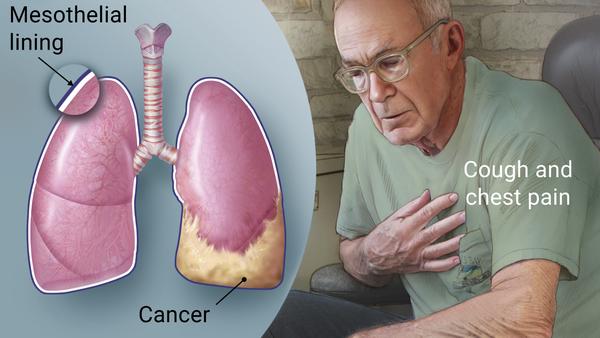 When the pleural mesothelium cells are affected and become malignant, they can invade and destroy nearly cells and tissues. The malignant cells are the ones forming cancer cells. These cells can spread to other part of the body.

Normally, before the disease is diagnosed, it has advanced. The survival rates are thus minimal at between 10% and 5% in the five-year period. Majority of the affected patients normally die from pneumonia or failures I the respiratory system. In the United States alone, close to 3,000 new cases are diagnosed every year.

Patients develop a small-bowel obstruction when tumor extends through the diaphragm. A smaller number die of cardiac complications when the tumor invades the pericardium — the thin membrane that surrounds the heart — and the heart itself.

The major exposer and risk factor have been for people working with asbestos. This is a group of minerals with tiny microscopic fibers. In cases where these fibers are released into the air, during the manufacturing stages, they can be swallowed or inhaled. A good percentage (about 75%) can be linked to getting this disease while at work.

There is also good evidence to affirm that close relatives and family members of the people who have contracted this disease have increased chances of developing mesothelioma or other related illnesses.

Though this is uncommon but possible causes of Mesothelioma. Zeolites are minerals that are related to asbestos chemically. Among these minerals is erionite which is common in turkey (found in soil) based on the research by American cancer society. Expose to this mineral has been connected to high rates of mesothelioma in those regions.

This is another uncommon cause of Mesothelioma compared to asbestos. According to reports by American Cancer Society, mesothelioma that was as a result of exposure to high doses of radiation to the chest or abdomen or post injection by thorium dioxide.

Some research in the animal laboratory has linked the possibility of getting Mesothelioma with the infection of simian virus 40 (SV40). Some injectable polio vaccines between 1955 and 1963 were contaminated with SV40, thus exposing about 30 million Americans to the virus.

Symptoms of peritoneal (abdominal) mesothelioma can include:

Because many conditions share these symptoms, having these symptoms doesn’t necessarily mean you have mesothelioma. It’s important to see your doctor to determine what is causing them.